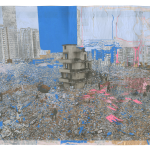 A partially demolished home in Hefei, Anhu province, China, which the owner refuses to give up until more compensation is paid. Such homes are known as ‘nail houses’. Photograph: Jianan Yu/Reuters. The Guardian, Wednesday 10 February 2010.

This work has been exhibited at Ceri Hand Gallery, Liverpool in 2011 as part of group exhibition “Memory of a Hope” & as a billboard at Bloc Projects, Sheffield, 2011.

Selling price is for an unframed work.